Sing, O muse, of Xiomara, daughter of King Antimedes. He sired many children, all returned to Haides before him other than she, the daughter of his old age. So great was his fear that she too would be taken before his time came to cross the Styx, that from her earliest days he forbade her to practice the arts of war or sport, but kept her close within doors, veiled from prying eyes...

AEGEAN is a tabletop role-playing game about a group of mythic heroes building a new, free city on the shores of the Aegean Sea. There are neighbouring cities to trade or war with, monsters to kill, gods to appease, deceptions, negotiations and bloody skirmishes.

This quick start covers the basic rules of the game including combat, healing, recovery, and downtime. A four part scenario, with advice for the Games Master, is included.

Do you have what it takes to defeat the mighty Nesaean Boar?

Included in the downloads are a copy of the AEGEAN Quick Start Rules book in PDF and EPUB format, along with a reformatted version of the PDF suitable for viewing on a smaller device, such as a phone or tablet.

Free downloads of the pre-generated characters and a blank character sheet are also provided.

In order to download this game you must purchase it at or above the minimum price of $12.99 USD. You will get access to the following files:

Aegean is a tabletop rpg about heroism and city-building set against a backdrop of Greek myth.

It's easy to learn, mechanically tight, and it has a lot of ways of giving players control over their rolls.

The quickstart is 103 pages---making 'quickstart' sort of an odd term for it---but it has a very readable oldschool layout and a great, dynamic, mood-setting piece of cover art.

Time-wise, Aegean is pre fall of Troy, but Sparta and Athens are circling each other, and a lot of the bigger myth cycles (Herakles, Jason and the Argonauts) are still getting warmed up.

The Greek pantheon is out in force and meddling with mortal affairs, and all the hyper-dangerous stuff that later heroes will contend with is still out in the wild.

For dice, Aegean uses a d10 pool system, with attribute + skill being rolled. 8s and up succeed, and the number of successes matters, but 10s don't explode. Instead they cash in for direct, useful effects. Ties on opposed checks result in rerolls---which has the potential to make for some weirdness if two people with very low pools throw down---and some checks require a higher minimum number of successes, leaving game difficulty tied to whether the GM thinks a situation is "hard" or merely "challenging".

On that last note, the example text *does* suggest using the Skill of an opponent (if any) to set the number of successes needed, and this is a really cool way to make stats matter while also avoiding opposed rolls, but I didn't see anywhere in the actual text advising the GM to do this.

Apart from attributes and skills, PCs in Aegean also have three meta-currencies: resolve, risk, and hubris. Resolve can be earned by rolling 10s, and can be spent to gain successes. Risk is generated in a lot of ways, and can be taken by a player to add successes to a roll. Taking more than two risk this way, or having any resolve left over at the end of a session, results in gaining hubris.

I'll get to hubris in a moment, but risk is fascinating, so I want to stay on that for a second.

Essentially, Risk is a sort of soft HP system. You can accumulate it to boost your rolls and do other things, but when you cross a certain threshold (determined by your Endurance, which is sort of your max HP minus your current equipment load) you take a wound. Wounds are harder to get rid of, and can inflict penalties, but they also can be spent like exp. In fact, there are special abilities that you can only buy with scars.

Basically, this is a game for folks who like to live on the edge.

Doubling down on this, Hubris is another meter, like risk, and it builds more slowly. When it crosses your glory (basically, how well-liked you are,) the gods turn against you. This has a number of effects, but the most notable is that you die when you die, rather than simply being taken out of the action.

Alongside these meters there 's a number of unique choices you can make that give your character the ability to break the rules in critical ways. And I'm spending a lot of time on character creation here, but just to be clear: I love it. Risk and resolve and balancing endurance against equipment and choosing whether to push so far that you take hubris---this is all great, and it mechanically empowers the players to have a ton of control over the narrative when they want to.

Combat likewise feels good, but in a more familiar way. I think if you've played 5e or pathfinder, you'll pick it up almost immediately as it has a lot of the same elements going on. You have an action economy. You can approach combat problems in multiple ways. A grid map would feel perfectly appropriate here.

Alongside the familiar combat, Aegean also includes a few elements that are more Blades In The Dark-ish. You get to automatically roll to recover after combat, buying down your risk. You also get downtime actions between adventures, which can be anything from gaining money to healing to buffering a single dice roll to gaining exp.

Downtime actions in Aegean generally feel good, and they tend towards advancing your character rather than simply managing your meters.

Now, as far as GMing tools, this PDF doesn't provide a ton, but it does have a fairly beefy sample adventure. Sample characters are also provided, but---as best I can tell---they're not actually in the PDF. You have to go to the website and print them, or go to the demo downloads here to find them.

The adventure is well-organized and feels suitably heroic in scope. It's also fairly straightforward, and it's an easy way to get new PCs into the game.

Overall, Aegean does a *lot* of things mechanically that I like, so I'm a little biased towards it.

However, if you like heroic, crunchy adventure games about slowly building something greater than yourself, and if you like your players to have a lot of agency, and if you find Greek myth to be at least a little bit interesting, grab this. It's very well made. 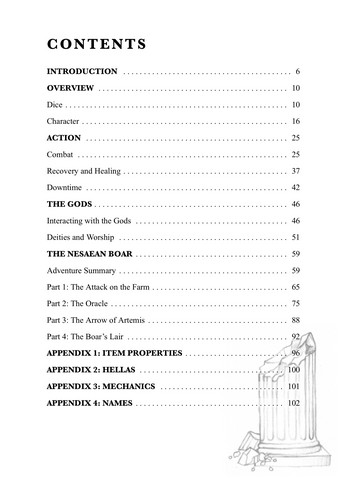 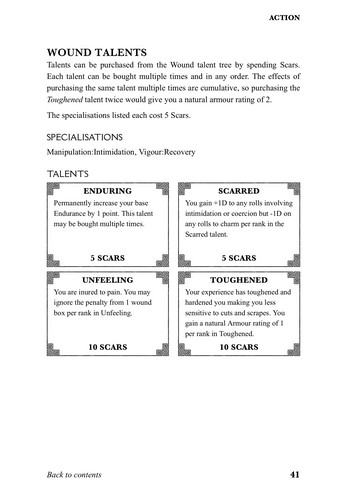 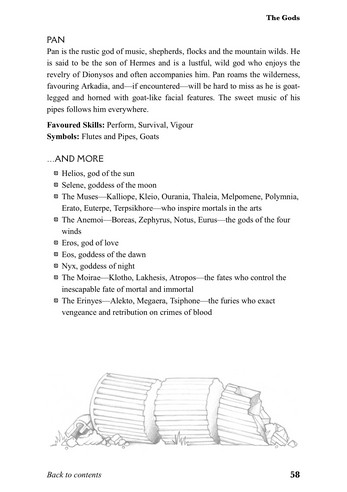